Fizzlebit is an adventure-comedy webcomic about a 6 year-old girl named Lydia who has every intention of taking over the world. She realizes quickly that world domination requires a loyal sidekick, and humans cannot be trusted for such things. One day, Lydia meets a strange penguin that can somehow live in the suburbs and knows she has found her second in command.

Fizzlebit rebooted on August 17th, 2014 after running bi-weekly-ish since April 12, 2010. It’s appropriate for all ages and is currently updating Mondays, Wednesdays, and Fridays.

Itâ€™s best to start at the beginning to know the full story!

Or go to the Archives and pick a page! 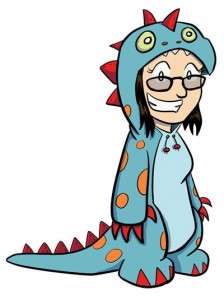 Fizzlebit is written, drawn, and colored by Lindsay Hornsby. Â She lives with her cartoonist husband James who draws the webcomicÂ BotchedSpot. They currently live in St. Louis and frequently wave at The Arch.