Celia Science and Anna Art is a series focused on two sisters that enjoy computers, science, art and solving troublesome problems. The first book focuses on Celia, the older of the two, who manages to soup up the family computer with new parts and also cause trouble for a sneaky computer hacker in the process! This story is super fun with an accurate focus on computer science and web coding. It’s also engaging for kids who may be having trouble finding books aimed at their advanced reading level. ( Plus, this particular volume includes some sassy dolphins! )

Justin created a great series and I’m honored he asked for my help in developing the characters and world. After working through the character designs, I also contributed color cover artwork and chapter illustrations. 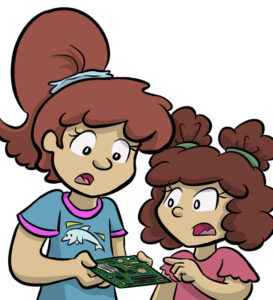 The book’s available as both an eBook and a print edition over on Amazon right now. Pick up a copy today, especially if you know a young girl who’s excited for computers and coding!

This site uses Akismet to reduce spam. Learn how your comment data is processed.